The slow rush to a bookshop sale, and a new technological discovery that will change the way we interact with technology. 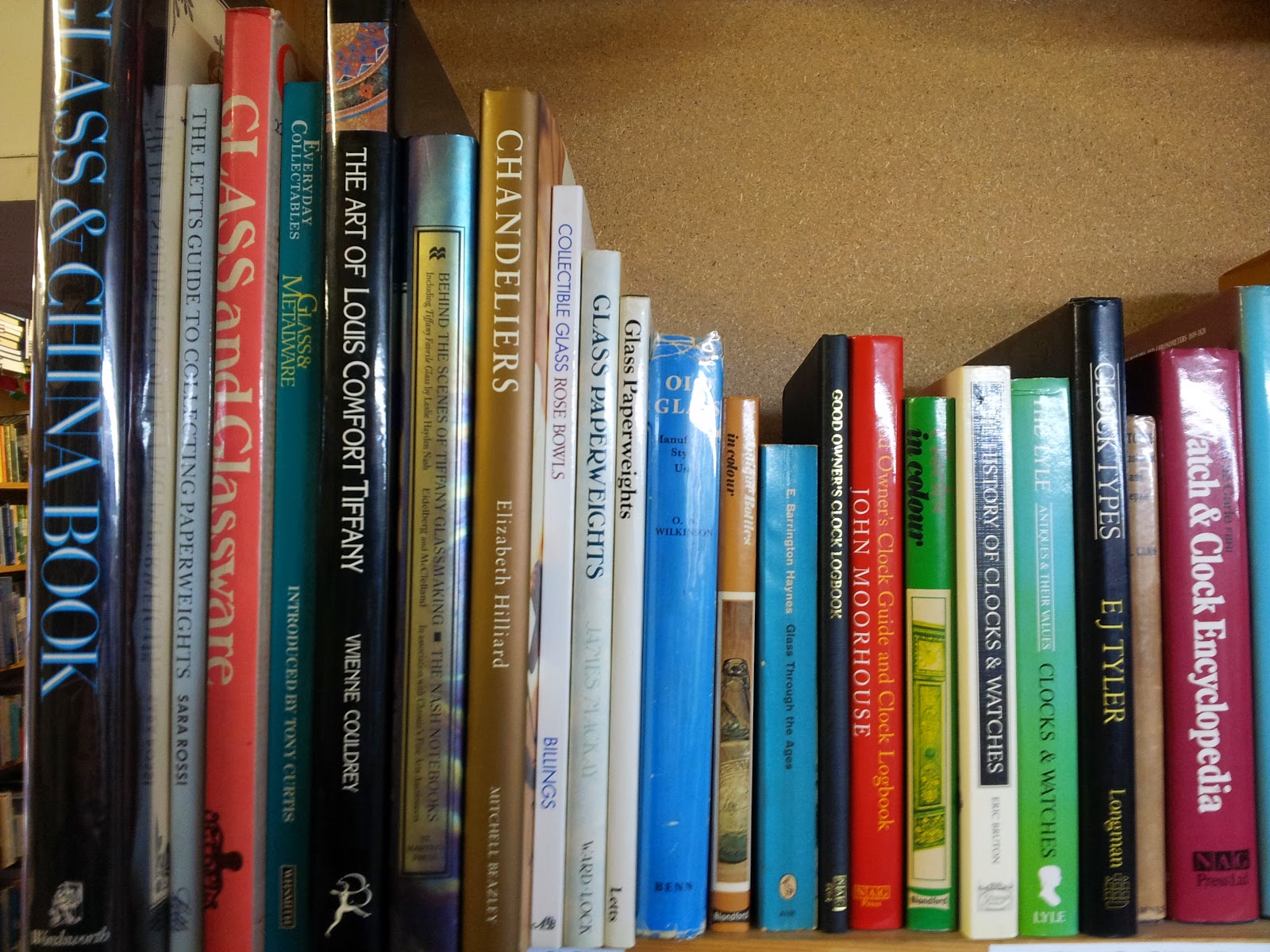 There is a sense in which the price or value of a book depends or depended on where it is, back in the day, which I guess means before the internet; this was much more the case. 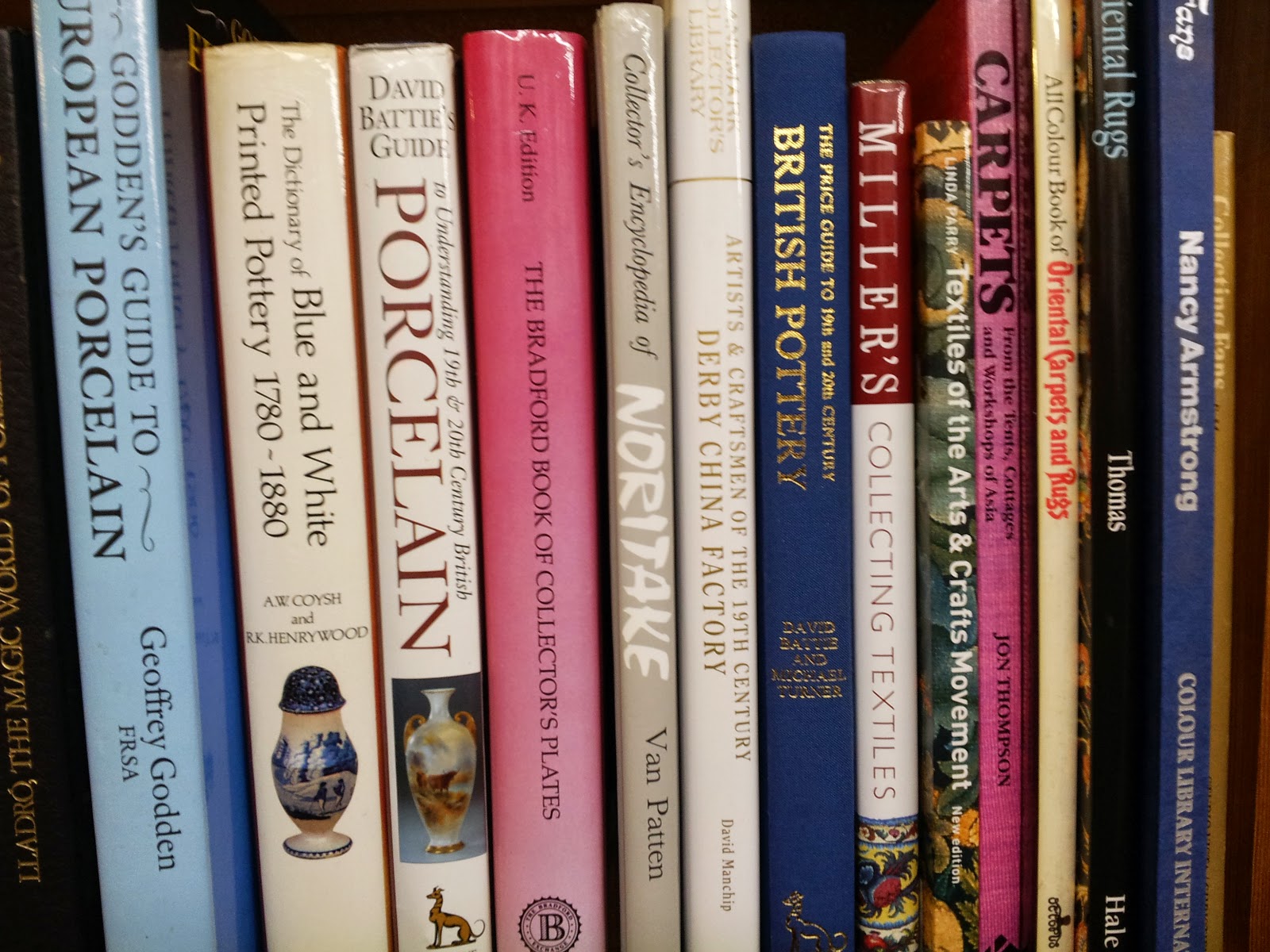 For us in the bookshop, with the nonfiction in particular, creating sections or areas in the bookshop where you can have a browse of the books that interest you, is what we try to achieve. 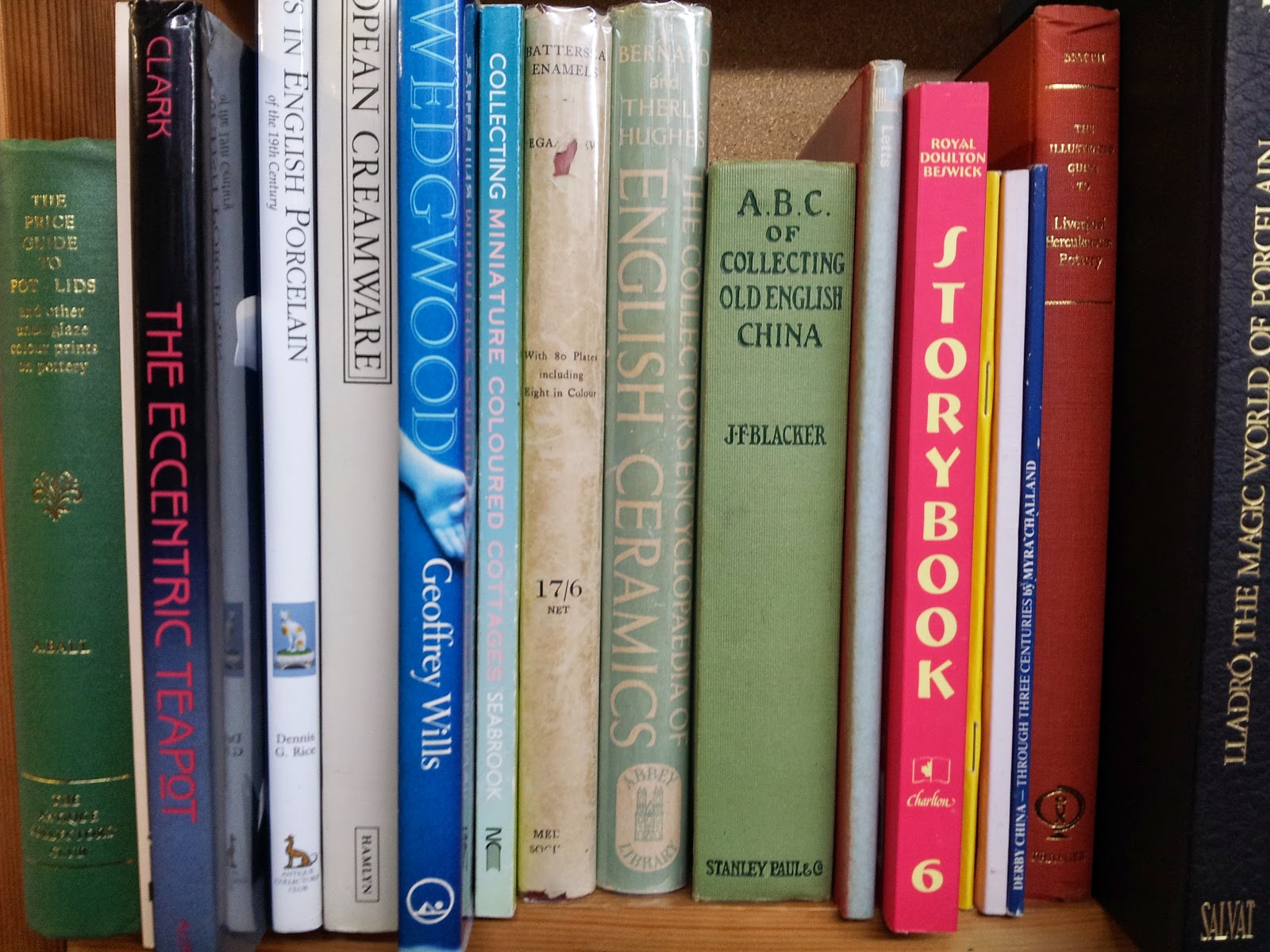 This creates something of a problem when it comes to dealing with the January sales, I will try to explain this with some of the books about antiques and collecting in my bookshop, photos in the post which should expand if clicked on. 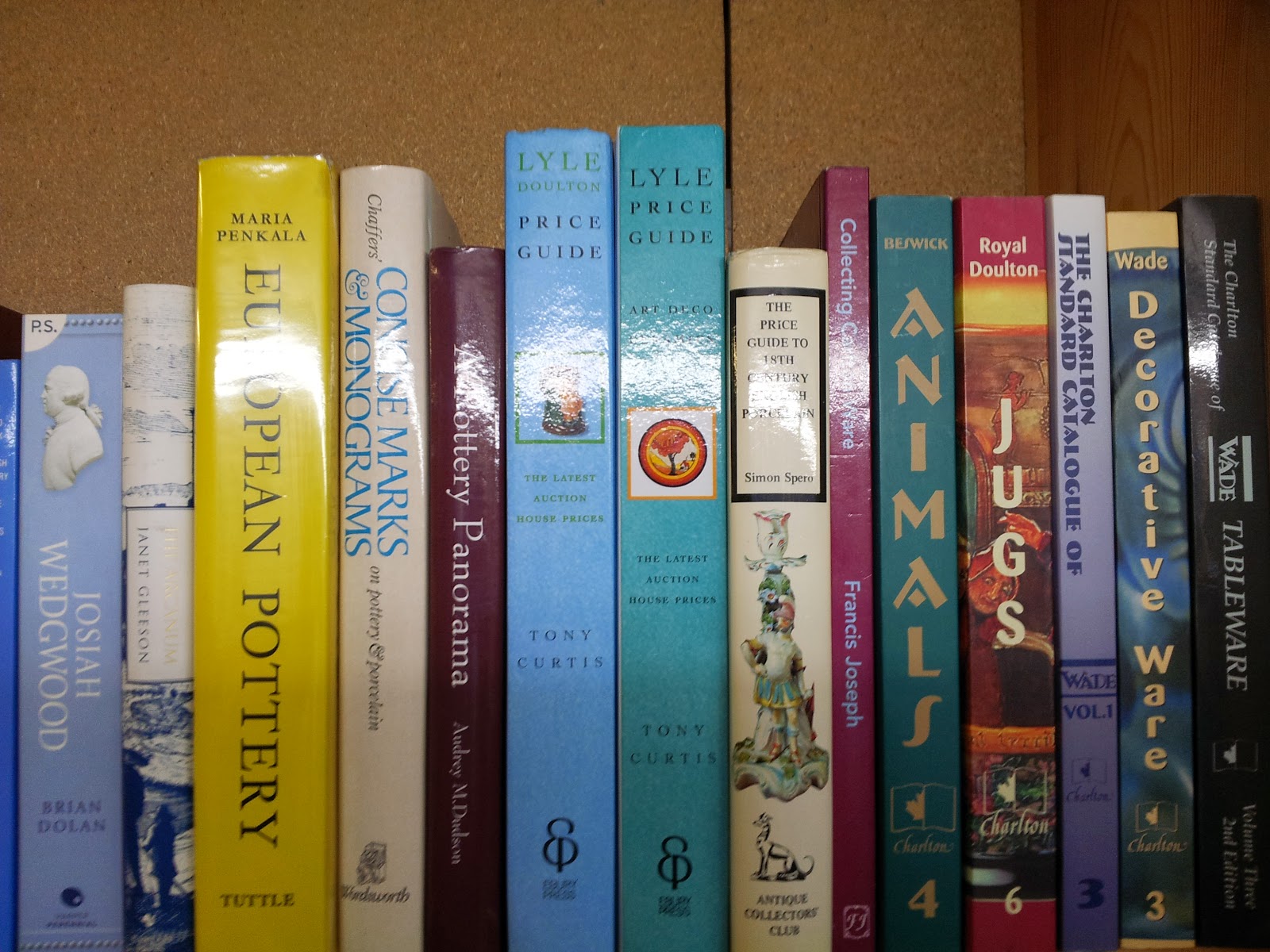 Now back in the day - before the internet - your average book about antiques was published between around £15 and £25, this meant that a fine (like new) copy sold secondhand for between around £6 and £12, as a slight aside to this we would have been buying them from people for between around £3 and £6. The way we did the sale wasn’t rocket science, we went around the bookshop pulling off the books that had been on the shelf for longer than three years or had been damaged in stock, halved the price (to around what we had paid for them) piled them up on a table in the bookshop and after two or three weeks they had pretty much all gone. 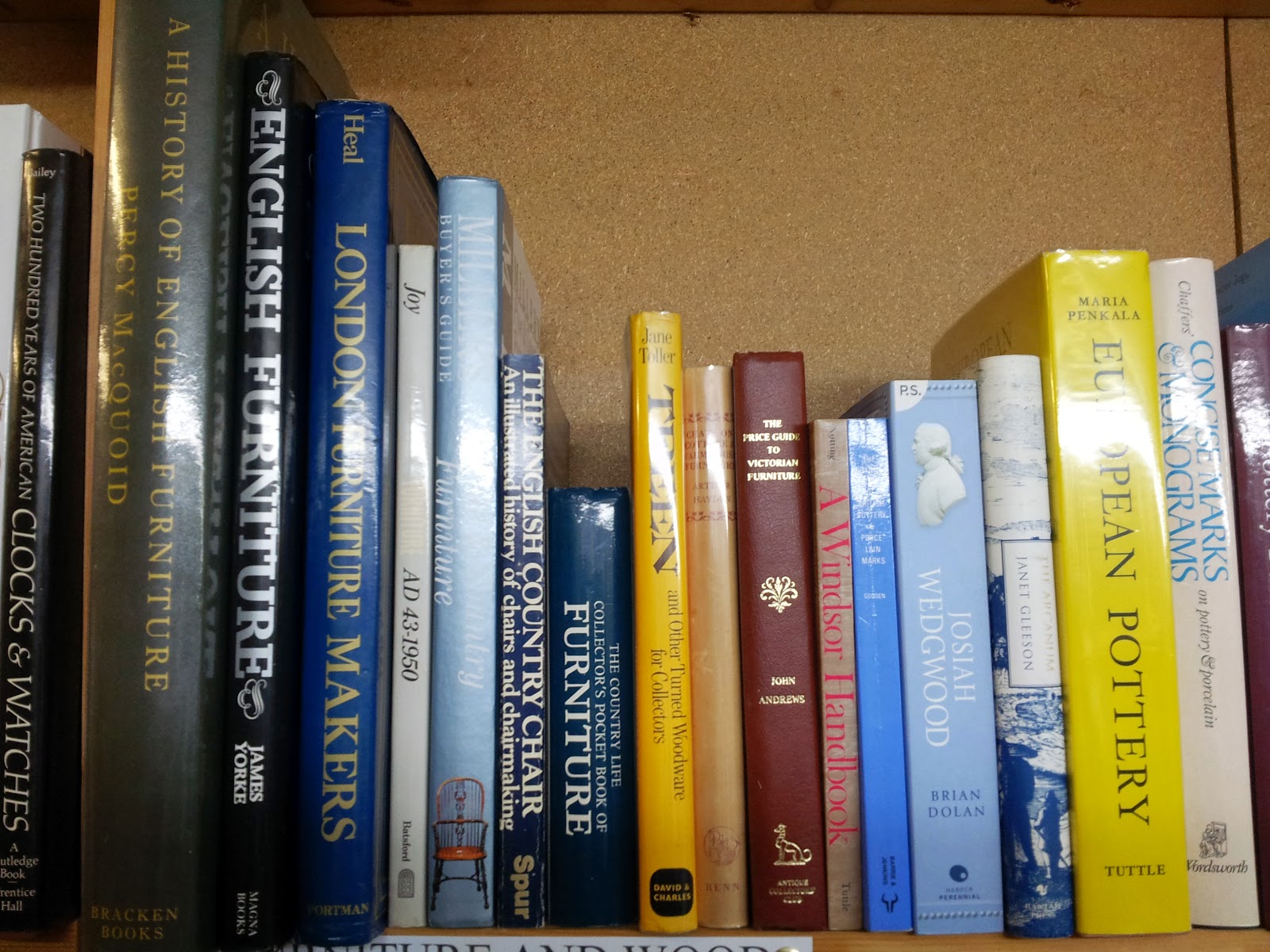 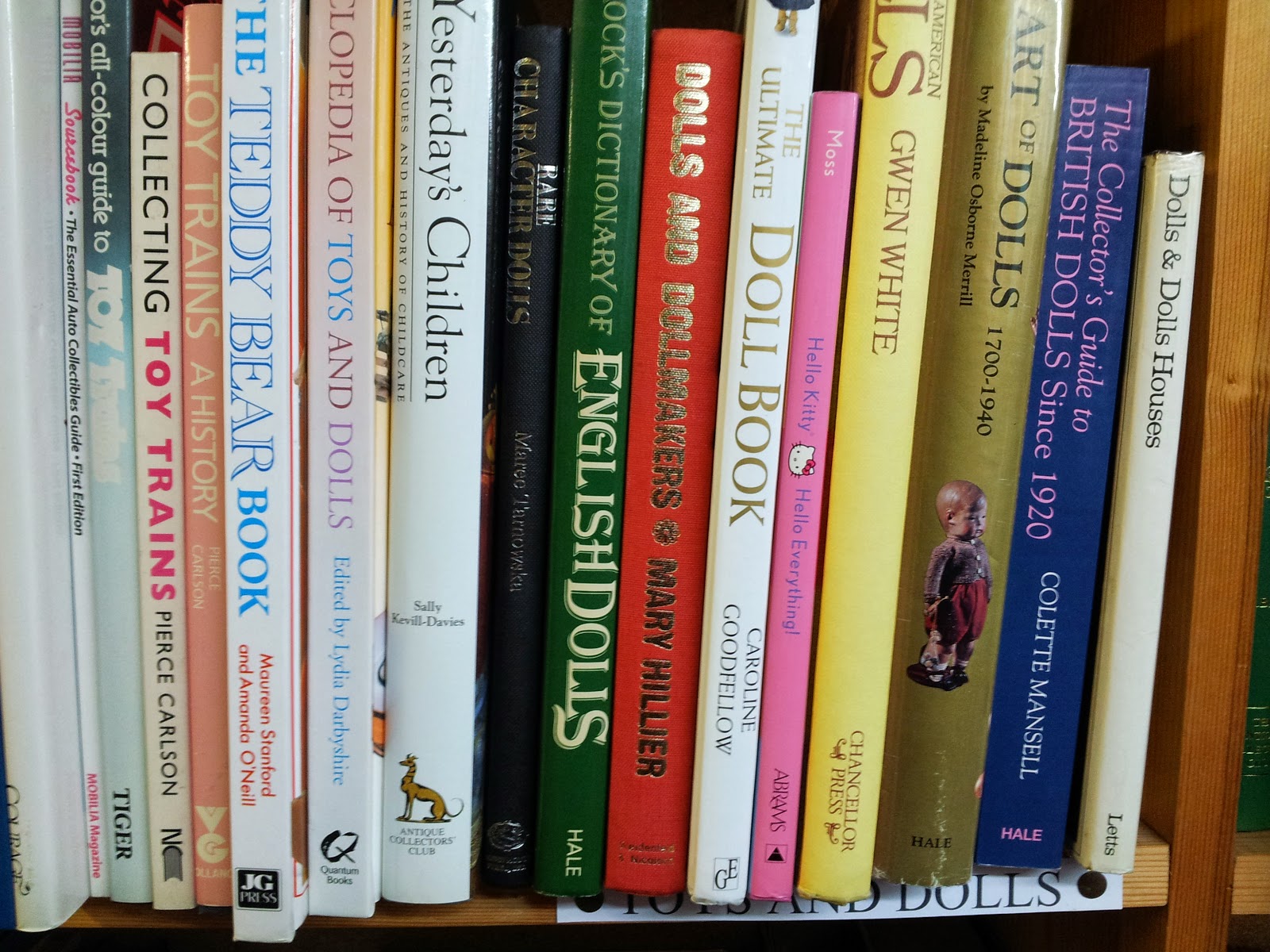 I would expect about three quarters of them to be on Amazon for a 1p and only about 5% of them not to be available online for a price including postage that actually covered the postage. Add to this the books about antiques which have been replaced by the internet, which are mostly the very general books with a small amount of information about a lot of different antiques - like the internet has - and you are left with the a considerable amount of books which assessed realistically need pricing at less than £1 each. 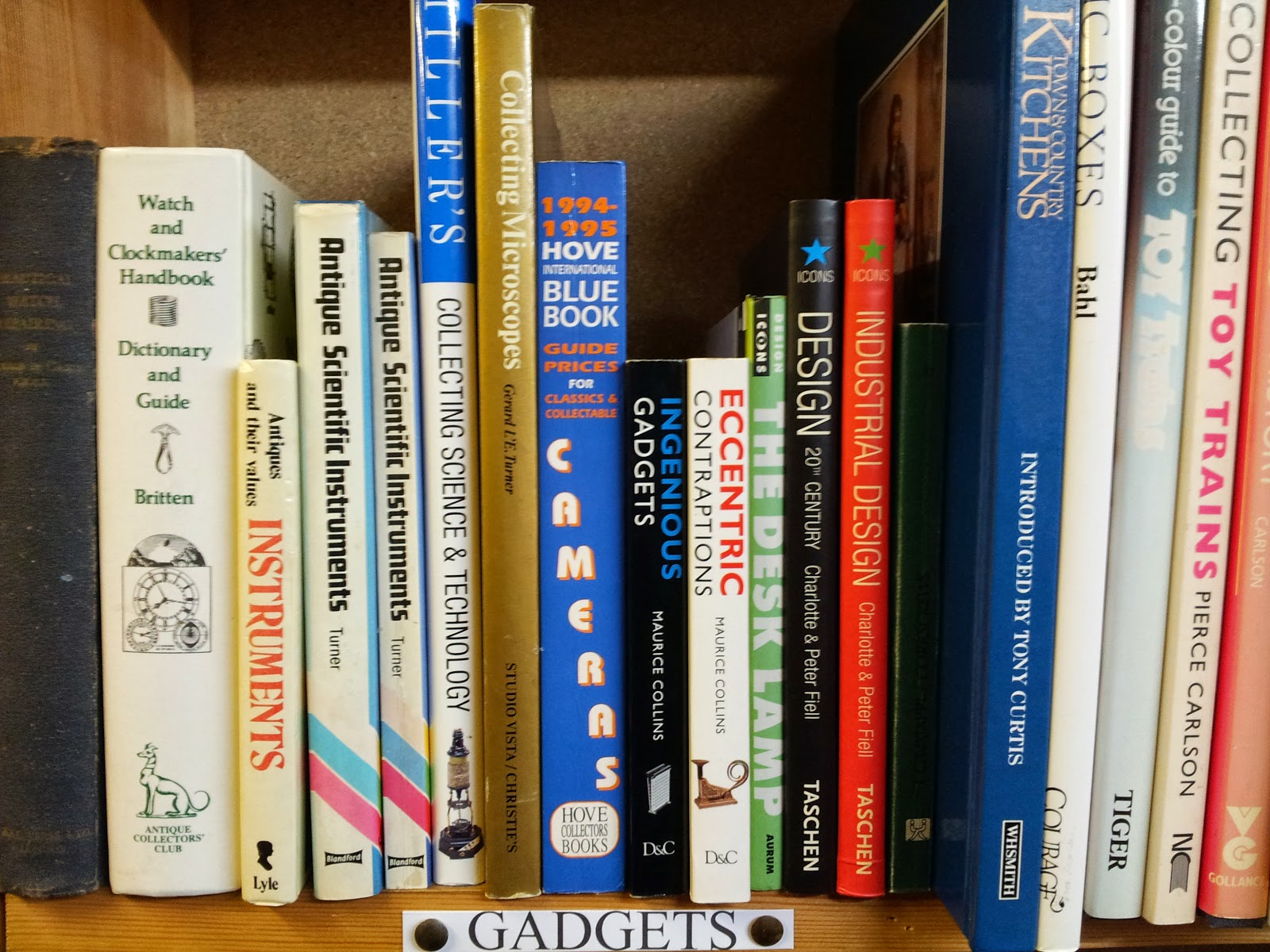 After some consideration I have put the antiques books that I have reduced to less than £1 on the bottom shelves of the antiques section. 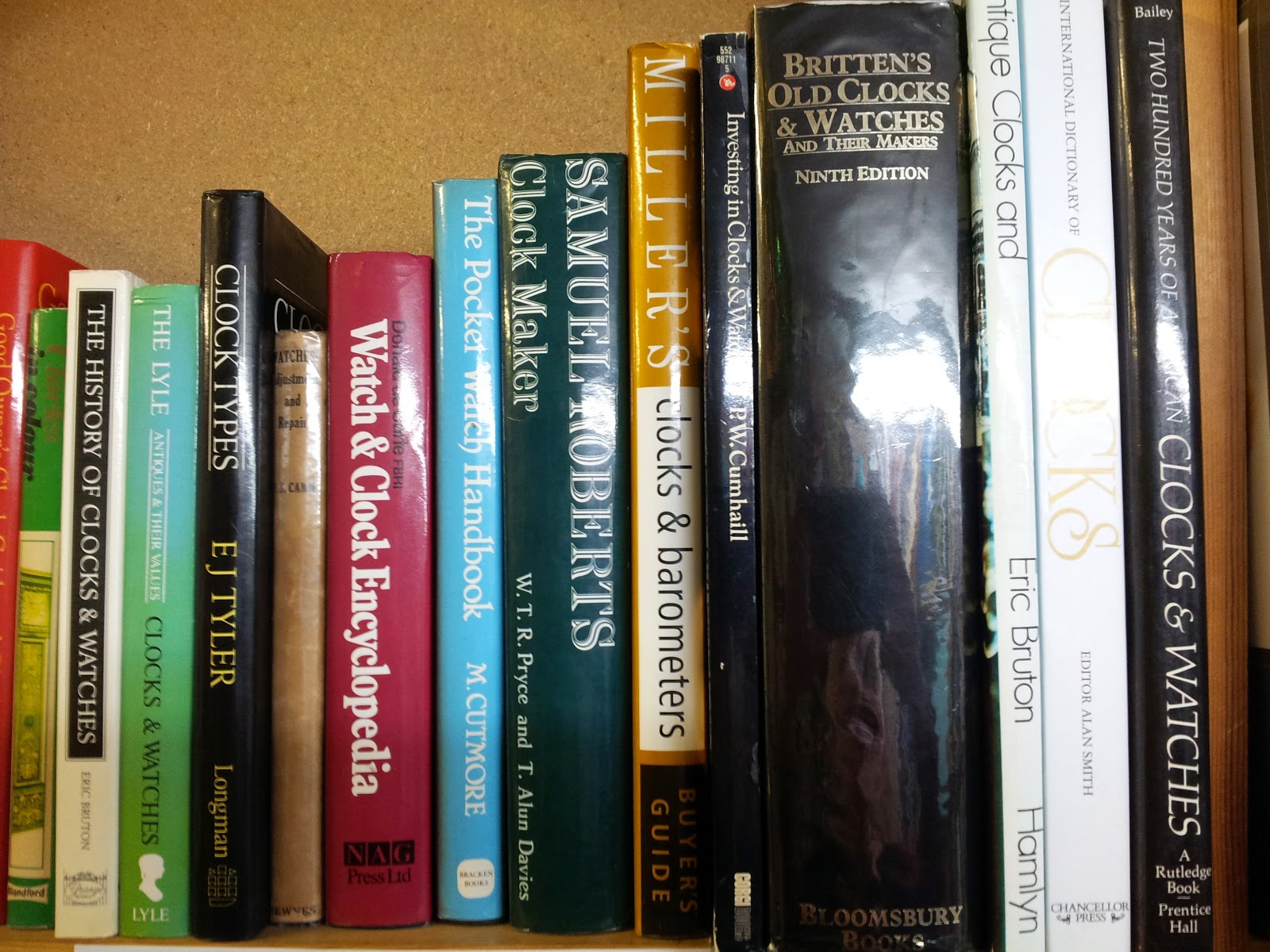 Below are the pictures of them, no signage or sale posters yet . 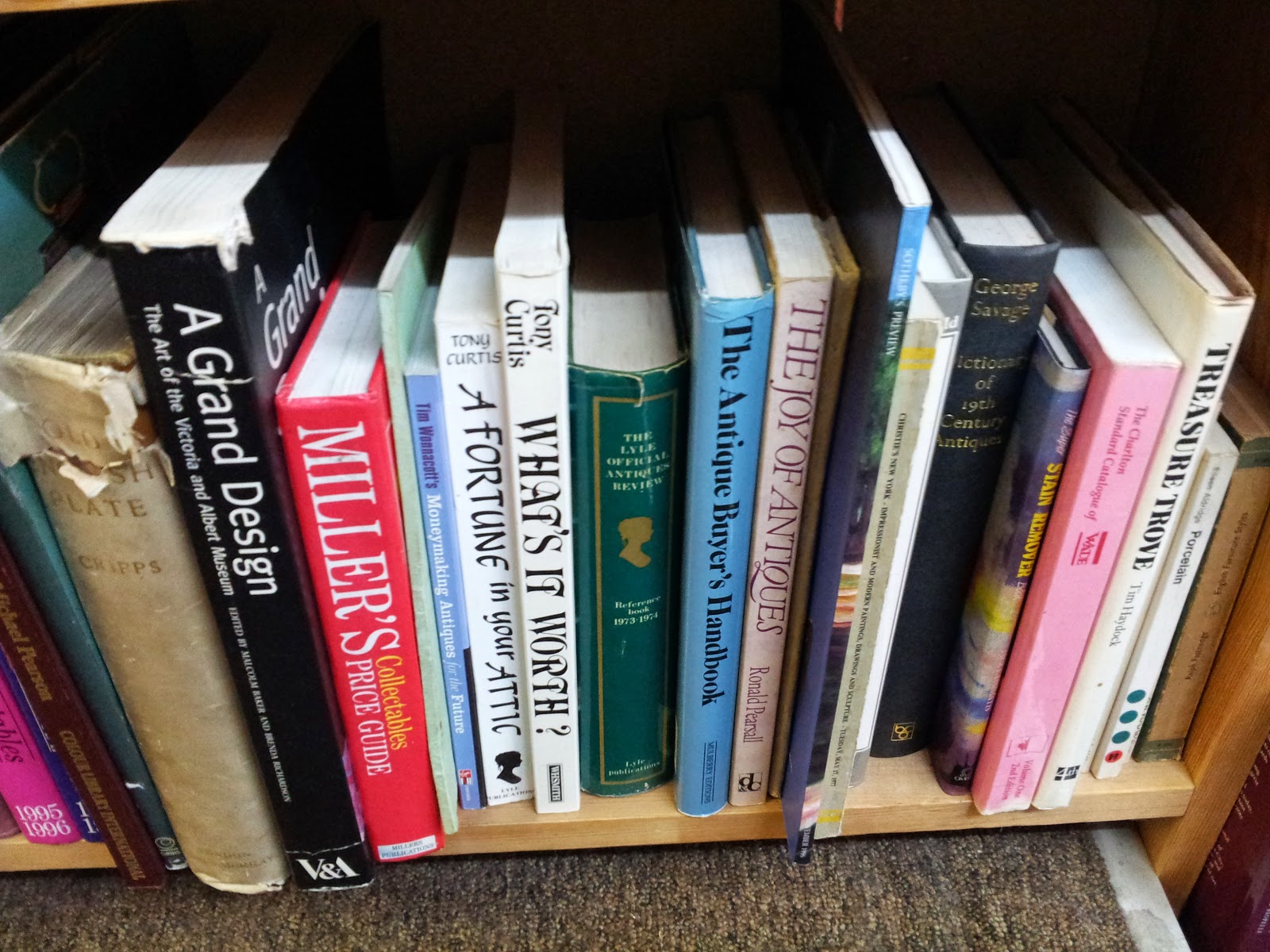 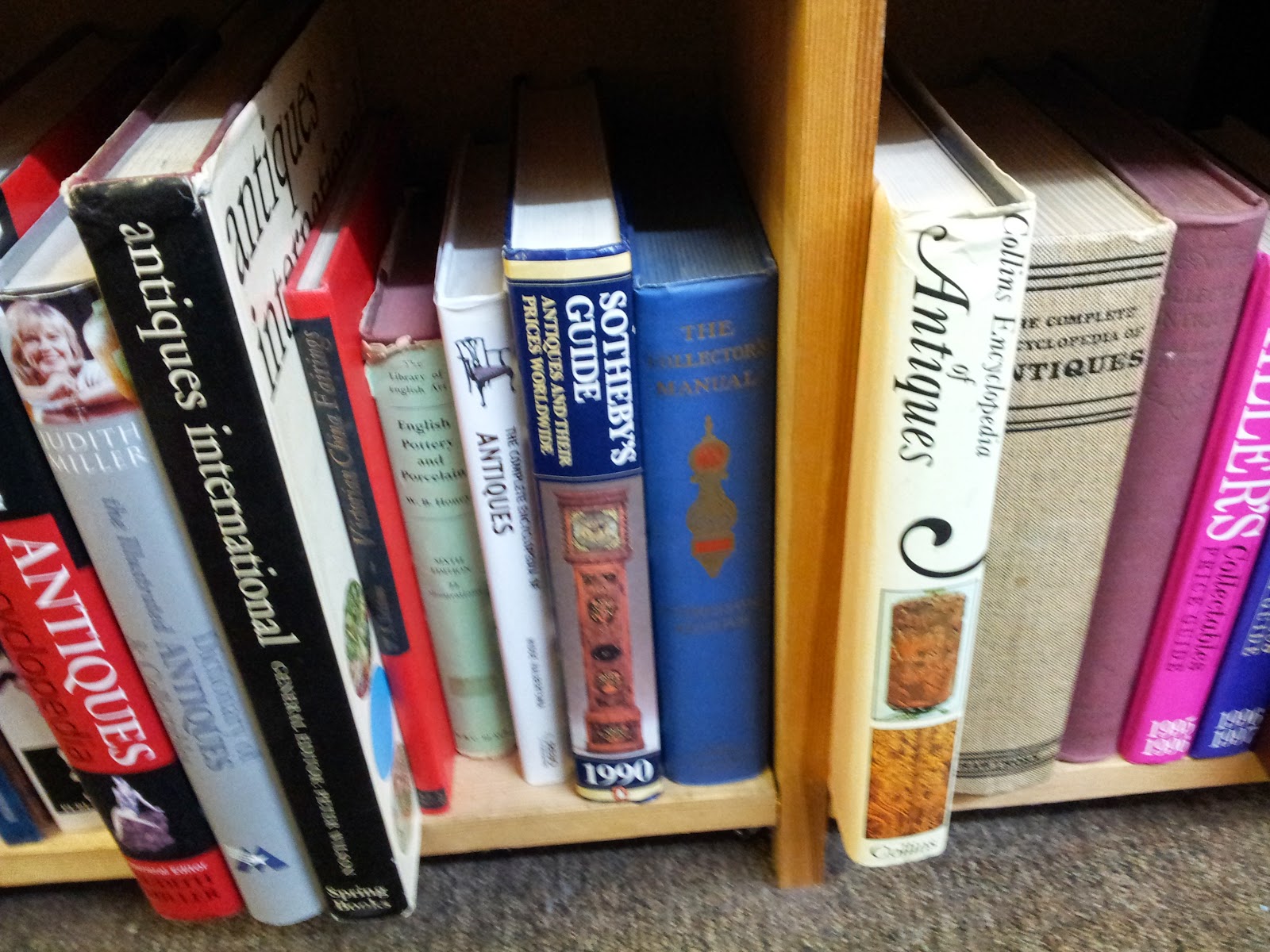 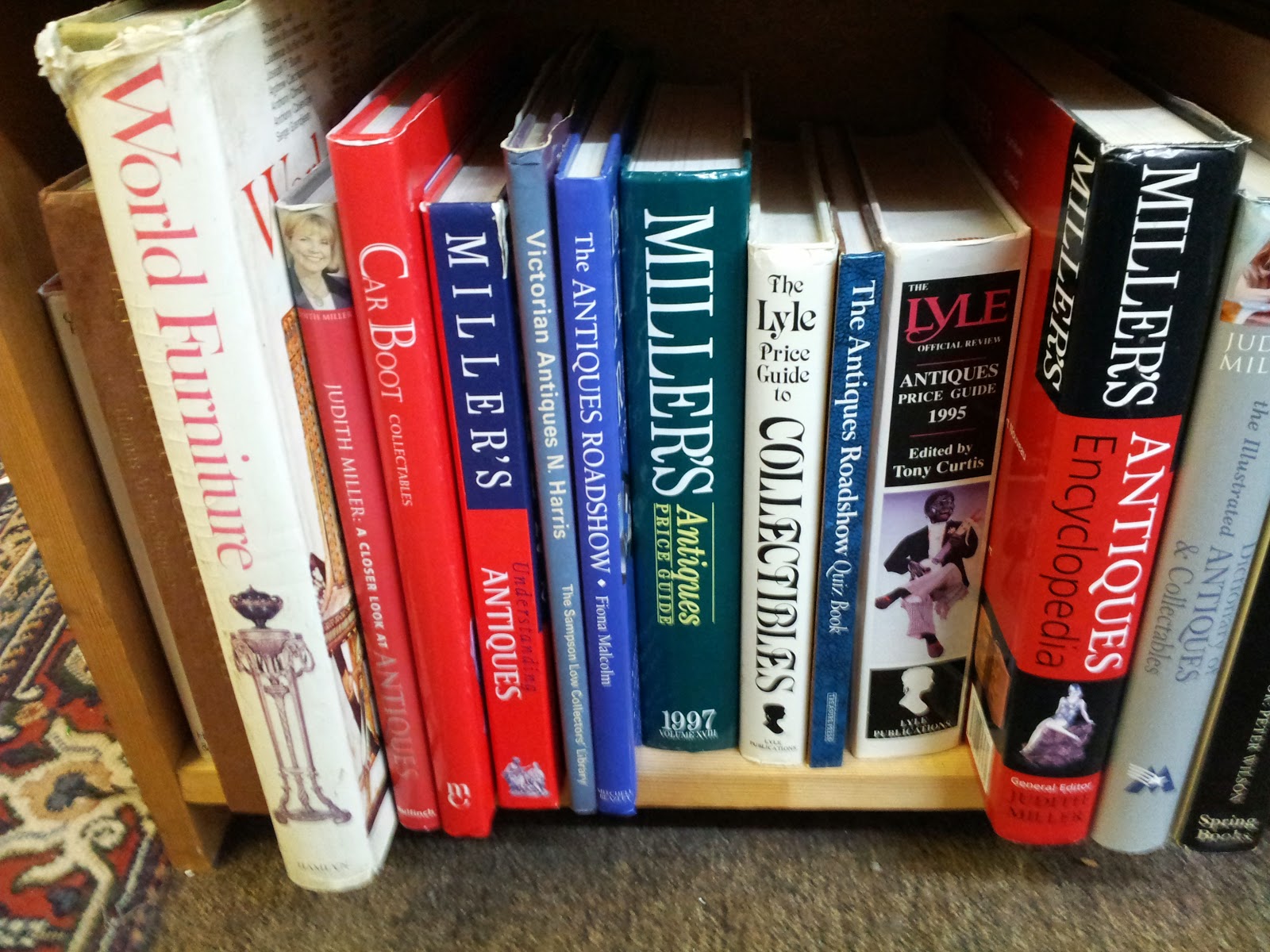 I was last at the cutting edge of technology in about 1972 and since that time I have seen a lot of devices improved, made smaller, more sensitive, less subject to interference, but very little which is actually a new invention or discovery, particularly in the area of the connection between man and machine.

With sensory connection between man and electrical machine probably sound is the oldest, one that has worked both ways i.e. the sound goes in and comes out with the telephone and the simplest form of amplification is a diaphragm compressing ground charcoal, which alters its electrical resistance, put this in series with a battery and the electrical version of the sound wave will travel a long way along a wire.

I would guess this discovery/invention is one of the most important in the last 150 years inasmuch as an electrical impulse can be turned into something non physical we can touch. So far we have been able to transmit sound and vision and it seems that transmitting the caress is now possible http://www.bbc.co.uk/news/technology-30553159 http://ultrahaptics.com/

I think the implications here are in the same order as the microphone, loudspeaker, TV screen, printer or photographic film. An example here is the surgeon in London should be able to use a robot to perform an operation in Paris while feeling the resistance of the cutting scalpel.


The implications of people being able to touch each other across the internet are truly mind boggling.

Oh and as no local blog post is complete without some reference to Manston the cabinet decision no to proceed with the cpo has been called in, see http://democracy.thanet.gov.uk/ieListDocuments.aspx?CId=119&MId=3469

And this email about Manston doing the rounds. I think for a 600 acre brownfield site this comes out at £250k per acre which seem a bit on the low side to me. 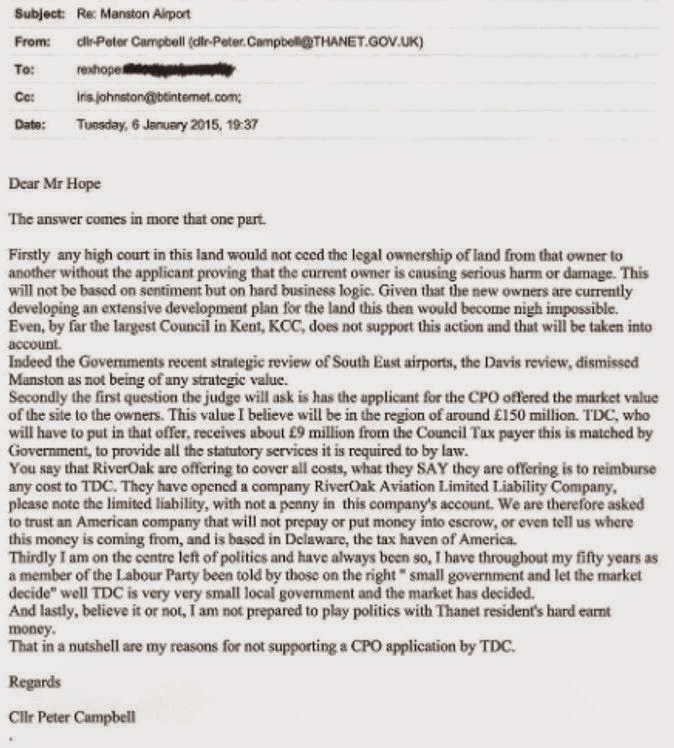 Cllr Peter Campbell has written a definitive email there. He is right of course.

In short if TDC went for CPO and it then goes wrong there is nothing to stop River Oak waiving liability and waving bye bye.

He also comments on market forces. The situation in which believers in free market tend to stop thinking it such a good idea when its arguments apply to themselves.

Jack, Communist leader of Kent miners, did it on TV during miners strike and demolished Mrs Thatcher's position by showing NCB as a captive market and citing the profit margins of the private industry supply chain.

I say this as a tory voter. Of course the North Thanet MP is closer to being a 19th century liberal. You are free (to starve), you are free to take risk with public money (with no risk carried by my advocating coercing self), ever the consultant and never the expert.

Well summed up Cllr Campbell. Manston as an airfield is over. Move forward.

Now to industry at Ramsgate Harbour .....

It is encouraging to read the views of Cllr Campbell and Anon at 8.27.
It does appear that at long last we are starting to discuss facts and not emotion and accept there is no logical reason to reopen Manston as an airport. The shame is that so much time and money has been wasted huffing and puffing about how to save it, rather than discussing the opportunities this vast brownfield site could offer.

anon 1 does the comment now to ramsgate harbour mean the anti this anti that stops for the airport and turns to the port???

anon 1520. No opposition to industry at Ramsgate Harbour from me. I can see that my comment did not make that clear.

I think industry, albeit wood recycling and concrete block making, at Ramsgate Harbour is also encouraging.

There is no competing for cargo for Ramsgate harbour. So raw materials accessing by sea for harbour area manufacture is ideal IMO.

There is another market that might be exploited. Used tyre mountains. They can be environmentally used to construct reefs so it appears to me there is an opportunity for a support harbour operation.

Instead of junkyard Manston you're saying junkyard Port 16:07?

How many jobs would you expect from your used tyre mountains and pallets etc?

You seem exactly the sort of character that's destroyed Thanet over the years.

3 USAF bases in UK to close...unlikely Manston would be worth saving instead

"Margaret Sole - It would be very interesting to see Iris's reply to this. I am sure that 99% of the SMA group have looked into Riveroak and what they are all about, and came to the conclusion that they are perfect for the job of re-opening Manston, not just for 5 years,or 10 years,but permanently. Such a Company,with the AAA+ rating in Conniticut would not dream of entering into a long term investment like this, unless they were (a) Totally Committed long term (b) were of the mind that this is a sound investment and (c) that it will work as per there business plan."

Aside for the raw stupidity and racism of UKIP the problem I have is they make Ramsgate look like a den of racist retards which i supposed it must be if these fools can be elected.

SMA are up in arms and say that Riveroak should sue - the same SMA that moan that everything is done behind close doors.....

Who wants one of the 40 jobs that Riveroak want to create ?

And how many years was Rozanne Duncan a Thanet tory ? All UKIP is guilty of is exactly the same as Thanet for years. Trusting Thanet tories. But UKIP has quickly learned the lesson and remedied the situation.

I'm a bit confused by the accusation that Manston Pickle has published "secret" documents. The documents published seem to be the ones provided to the council in support of their application to become the council's indemnity partner. Whilst there was a confidentiality agreement during the negotiations, it was my understanding that RO lifted the restrictions following the decision not to sign up with them. So how can anybody be "sued" for revealing the documents? Don't people want to know why Riveroak's application was unsuccessful?