Pleasurama minor update and a minor ramble from the bookshop

The Pleasurama fiasco’s minor update is that the ownership of SFP Ventures UK Limited, the UK offshoot of the Virgin Islands company SFP has changed ownership.

This, the UK company is the one TDC have been negotiating with over the Pleasurama fiasco here in Ramsgate for about the last ten years, since it was formed, I would guess partly to overcome UK money laundering legislation. As far as I can work out TDC doesn’t have any method of checking moneys received form non UK companies and relies on UK banks having done the money laundering checks.

All that said I guess we don’t want the council wasting too much money checking on money sources and I guess this is an economic way of producing a reasonably reliable result.

Here is the link to the change of ownership details http://companycheck.co.uk/company/05666803/SFP-VENTURES-UK-LIMITED/directors-secretaries I have also put a screenshot in the post in case the link won’t work for some. 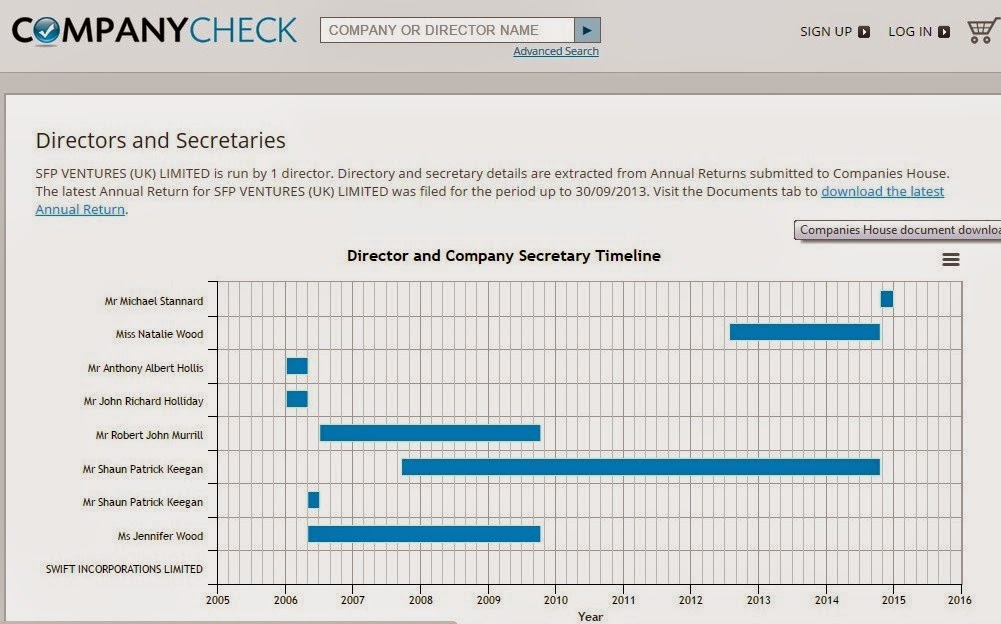 Michael Stannard is the managing director of The Cardy Group http://www.cardygroup.co.uk/ who have been the building contractors (the company responsible for constructing the development) to SFP since 2009.

The good aspect of all this is that they are a local company with a very good reputation who employ local people.

At the moment the bad side of this is that the original developer didn’t do a proper survey of the site to establish what the civil engineering constraints relating to building between the sea and an unsupported chalk cliff were before commissioning the plans. These plans then were granted planning consent which TDC says stands in perpetuity. Initially back in 2003 the intention was to build in front of the cliff without any repairs being done to the cliff façade and although the council have spent about £1m on repairs it is self evident that the repairs haven’t been entirely satisfactory.

Of the plans themselves and disregarding the civil engineering problems but considering the building we may eventually get, the best one can say is they are dated and due to the gull winged roof having been remove due to the architect’s error over the height, rather ugly.

At the moment there is an investigation going on about the condition of the cliff façade which see.

I have been sent your details by Cardy Construction Ltd who inform me you have some concerns relating the area.

As part of our routine maintenance regime, we are due a full structural inspection of the area and have instructed a survey.  Additionally, we have notified the HSE that we are about to undertake the inspection and will of course share all the information we have on this matter.

I trust this gives you some assurance, however, if you have further comments please send them direct to myself.

As I haven’t heard anything about progress on the issue recently I sent the following off to the council.

From: michaelchild
I am writing to you for an update on the Pleasurama site, mainly as there is a certain amount of rumour circulating on the internet.

There are four main areas of interest relating to the civil engineering infrastructure of the project and updates on any of them would be useful at this time.

1 The cliff façade condition survey; is there any progress on this? And if there are any reports that are in the public domain can you please send them to me by email?

2 The flood risk and structural integrity of the sea defence, has any investigation been made into this? The latest information I have on this that the EA strongly recommended a flood risk assessment. Mike Humber emailed me telling me that the sea defence dated from 1860 and the council while being responsible for the maintenance of the sea defence hold no plans or maintenance record for it. This is particularly important now the construction method has been changed from bored piles to pad foundations sitting on sand held in place by the sea defence.

3 Cliff maintenance access, has any assessment been made to ascertain if there is enough space between the proposed development and the cliff façade to maintain the cliff façade for the life of the development? Important as the various surveys of the façade describe it as having a short serviceable life.

Enough about Pleasurama and on to the ramble.

On the bookshop front I did open my bookshop today albeit a little late and considering the wet and windy weather it is proving to be a normal trading day although I will probably close early, mainly because we have more friends and family coming today and have another turkey in the oven.

The main news item today is part of the rebuilt Dreamland scenic railway blew down in the night, see http://www.thanetgazette.co.uk/Dreamland-s-Scenic-Railway-blown/story-25771766-detail/story.html this isn’t something to worry about as this type of structure can be fairly weak in places until it is fully completed and with my engineering hat on I would say a very minor setback. My only concern looking at the photos is that the quality of the wood looks pretty awful and much worse than would have been sourced when it was originally constructed. Heavily knotted deal rather than quality pitch pine doesn’t make the best framework for a roller coaster.

I will ramble on here, have just come across this one http://www.thanetgazette.co.uk/Ramsgate-Town-Councillor-Trevor-Shonk-immigrants/story-25771851-detail/story.html and as one of the shopkeepers who talks to Trevor I am a bit gob smacked.


So the immigrant situation here in Ramsgate, ongoing wise we have a small indigenous population which extends back to my great granny was born in Ramsgate, this is less than a lot of places as the most of the population was evacuated during both world wars.

I am a bit vague as to if there are any families here of ancient Briton origin or even if any of the families here have been here since William the Conqueror’s time, I guess as Ramsgate started out around 1550 with a few of the fishermen from St Lawrence putting up something like charcoal burner’s huts to service the local fishing industry we are probably looking at something around then.

I would guess with the fishing industry being a mobile business and Ramsgate doing considerable business with the Baltic countries the Polish community dates back to then.

I think the Jewish community here dates back to around 1700 and probably once again started from our seafaring connections.

We have the usual mix of Asians running small grocery shops Italians, Chinese, etc running restaurants and a few mostly upwardly mobile Europeans Polish Hungarians and so on who seem to be working pretty hard on the whole.

On the book front quite a few of my customers have immigrated to the UK including Jocelyn McCarthy chairman of the Ramsgate Society, this doesn’t seem to prevent them from buying books.

Yes we have had some influxes of problem people moved into social housing here by various sorts of manipulation by various levels of government, social engineering if you like, but the vast majority appear to have been UK residents.

Then there is that foreign company that says it wants to build an airfreight hub at Manston, I did ask him at some length if he was supporting the UK company that wants to provide 4,000 jobs there.

Then there is the business of the foreigners and the hospital beds, I had a minor op at QEQM a couple of years ago, the surgeon was Polish.
Posted by Michael Child at Saturday, December 27, 2014

Michael regards ownership and management. Shaun Keegan still retains the (one) share ownership of SFP Ventures (UK) ltd however the only 2 directors seem to be Natalie Wood and Mike Stannard. I doubt Keegan will give up ownership until he gets paid out which seems not to have occurred just yet

Cllr Tony Ovenden is a descendant of smuggler Joss Snelling (Joss Bay). So that family been in area a while.

It is true that if you want to see (or rather feel) community tension you should live and work in a place which has large ethnic minority populations.

I could take you to an order picking warehouse in the Midlands and challenge you how long you can work alongside the Muslim overtime shift.

I could safely bet you wouldn't stay two hours. Nigerians, British and Poles have all retreated within two hours. Unless you wear a respirator you cannot work in the same building with them.

I would challenge you to send your wife to a women's aquarobics session at a local sports centre. In the jacuzzis at the end of the pool older Muslim men take up station to stare hatred at women in swimming costumes.

At the end of the session if a woman gets into Jacuzzi the Muslims immediately stand and get out.

The council delivered a circular to households. Studies had shown that the Asian community costs the NHS more due to ill health due to their more sedentary lifestyle. So council was planning to build Muslims their own sports centre to accommodate their religious reasons for not wishing to train at a gym with non Muslims.

You would find that some branches of supermarkets have been virtually left for Muslims to shop at. British people cannot stand the sedentary shopping style and aisle blocking selfishness of Muslims.

When the EDL held a rally the locals went along but were not impressed that EDL speakers wore face masks while criticising Mulsim woman face covering. But the police were kettling the rally. It was locals who said to police let them out. And it was locals who smashed the police line open when the cops refused to release the kettle.

They wanted to hear what EDL had to say about the "Mozzies" but they were beggared if they were letting police remove their right of freedom of movement when they decided to leave and go for a drink. And there is a powder keg atmosphere Michael.

As it happened the police recognised that they would get a hiding and left those locals alone after the police line was broken.

If the Mossies and Anti fascist people had advanced on locals thinking they were EDL then the slaughter of Mossies and anti fascists would have begun. It is as close as that. One spark.

18:26 good to see ukip keeping up the race hate and rumours and lies. A bit too Daily Mail but keep printing it so we can laugh.

On pleasurama Cardy trying the old switcheroo on directors doesn't really work. As with Manston its finished .... as are all those involved....

Just out of interest do you actually ever read the Daily Mail? If so why?